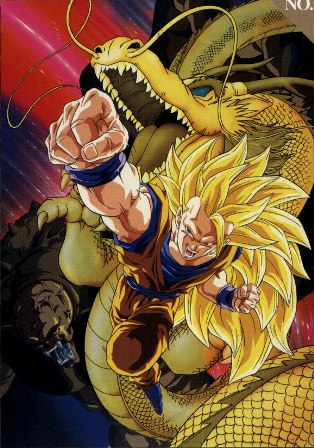 About Movie – A mysterious being named Hoy arrives on Earth and asks the Z Warriors to use the dragon balls to help him release Tapion. Tapion, an ancient warrior imprisoned in a music box, and Hoy needs him to fend off the monster Hildegarn, who is coming to destroy the Earth. But when they realize that Hoy is the last survivor of an evil race bent on the destruction of those who they consider inferior, and that by releasing Tapion they also released Hildegarn, they must fight alongside Tapion to stop the monster.

About Movie – This movie features basically: Goten, Trunks, No. 18, Krillin, and Mr. Satan. Goku makes a brief appearance, but for the most part this movie is Goten’s and Trunk’s. Mr. Satan must face down a challenge and the two kids and No. 18 accompany him and do all the fighting as Mr. Satan must keep promising to pay 18 what he owes. What they find is a bio-labratory where the super strong Brolli has been reborn. Goten and Trunks must face him down with their only help Krillin and 18 and also must watch out for this purple ooze that absorbs everything in its path. This one could use a bit more, but it is one of the funnier movies in the series. 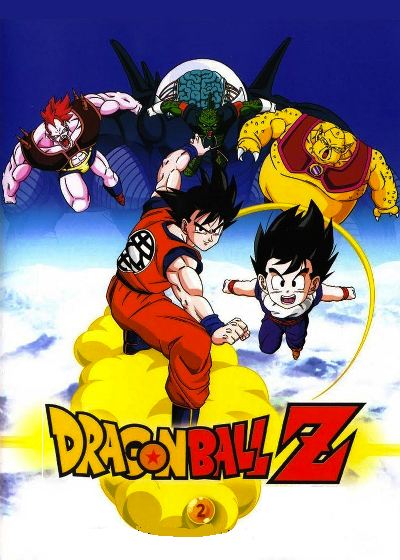 About Episode – At Kame House, Fortuneteller Baba attempts to get her Crystal Ball working, but fails. After a brief argument between Bulma and Fortuneteller Baba, Master Roshi explains that the reason the ball is not working is because of the vast amount of energy the two warriors are emitting. Bulma uses the scouter to see if they are fighting or not. Vegeta powers up in the air, getting ready to attack. Goku says he does not like the feel of this. Vegeta charges and beats Goku up bad.Goku uses Kaio-ken x2, narrowly escaping an attack from Vegeta. Goku says he has to use a Kaio-ken x3. Watching from the ground, a hidden Yajirobe says to himself that Goku is crazy. When Goku worries about his body not being able to take the triple Kaio-ken, Vegeta mocks him. Goku uses the Kaio-ken Attack, which works and does damage to Vegeta. Meanwhile at Kame House, the scouter that Bulma is using to monitor the fight explodes. King Kai is upset with Goku for using a triple Kaio-ken attack.

Goku throws Vegeta into a small mountain. Vegeta roars and blows the rock up. He charges at Goku, but Goku gets the better of him. Goku is worn out. At the island Fortuneteller Baba is still trying incantations to get the ball to work. Chi-Chi and Ox-King are worrying about Gohan. Master Roshi says that the two are fighting furiously but Goku seems to be losing because of the amount of energy he just used up. Goku somehow finds the strength to hit Vegeta some more. Vegeta gets to his feet but falls down

About Episode – Goku punches Nappa again in vengeance for Yamcha. Nappa comes off the hit easily, and launches a Ki beam at Goku. Goku is able to turn it away using only his ki energy. Nappa raises his hand for another, but Goku zips up to where he is and pummels him toward the ground, in vengeance for Piccolo. Goku connects with him before he hits the ground and knocks him into a hill in vengeance for Tien. Nappa comes out of the rubble stark raving mad. He tells Goku that he hates him and is going to slaughter him. Vegeta tells Nappa that he needs to keep his cool, or he will lose the battle. Nappa uses his two-finger technique, the same one he destroyed the first city with, which forces Goku to take to the air. Nappa follows him, and attacks him, doing increasingly better, but still not good enough. Nappa launches an Ki wave from his mouth at Goku, but Goku manages a defensive Kamehameha at point-blank range, deflecting it. Vegeta orders Nappa to disengage from the battle, since he is only disgracing the Saiyan name.

Nappa starts to land, but notices Krillin and Gohan. He flies at them with aspirations to kill them. Goku flies after him, but sees he will not stop Nappa in time, and consequently is forced to use the Kaio-ken. He punches Nappa in the back, and lands in time to catch him. He tosses Nappa’s beaten and battered body over to Vegeta, and tells them to leave the planet. Meanwhile, he tells Krillin about the strengths and weaknesses of the Kaio-ken technique. Nappa asks Vegeta to help him up, but Vegeta grabs him and throws him into the air. Vegeta kills Nappa with a Ki wave of his own, shocking the remaining Z Fighters with his power. Krillin tells Goku to change locations so that the bodies of Tien, Yamcha, and Piccolo don’t get harmed. Goku doesn’t understand Krillin, since the Dragon Balls have vanished, but Krillin promises to explain after Goku wins the battle.

Goku tells Krillin that he isn’t going to die, and that he’ll take Gohan on another camping trip when the battle is over. He tells them to go to the Kame House. He descends to tell Vegeta that they will change locations, and the two of them fly off.